Step-by-step instructions specific to the ’82-85 Celica/Supra:

Step one, pull all your interior stuff.
—A: Console has two screws in front, two in back, and two in the little compartment bottom, just move it back an inch or so, no need to unplug and remove.
—B: Pull the temp control knobs off (tug straight back, wrap with a shop towel and pull with pliers if needed) and three screws in it’s face let it free.
—C: Pull your ashtray and you’ll have six screws in the radio surround, it comes back and you unplug one connector. Two screws on the sides of the big plastic piece and it’ll come free, up and over once the shiftknob’s off (shift to third for easiest removal).
—D: Pull up the little rubber flappy at all four corners and remove the 10mm bolts, same for the four in the shifter itself.  Make sure you’re back in neutral and pull the shifter out.
—E: (OPTIONAL BUT SUGGESTED) Place a jack under the center of the transmission cross-member and remove the 4 bolts attaching it to the chassis.  Lower the tailshaft ~3″ to give access to the 6 bolts around the upper shifter plate and remove them.  Lift the shift plate off carefully and don’t lose the rubber seal or the metal spacers.  (Telescoping magnet tool if you drop one.)

Look down in there and here’s a better shot of what you’re working with.

Step two, prepping the damaged socket.
–A: In the picture above, you see what this sucker’s made of. Ring of metal, ring of rubber, ring of metal (MIGHT have remenants of a plastic ring too, but probably not). The plastic ring may be sitting down in the middle of it, or partially attached, pull it out if so. He’s the fucker responsible for your sloppy shifter, throw it on the floor and spit on it.

–B: One ring of metal (preferrably the inner one), has got to go. Looks bad, easy to do. Using a flat-head screwdriver, pry out the metal ring a bit. Once you’ve got enough bite, use your needle-nose pliers and apply inward pressure while you work the metal ring away from the rubber wall a bit at a time until it comes free. 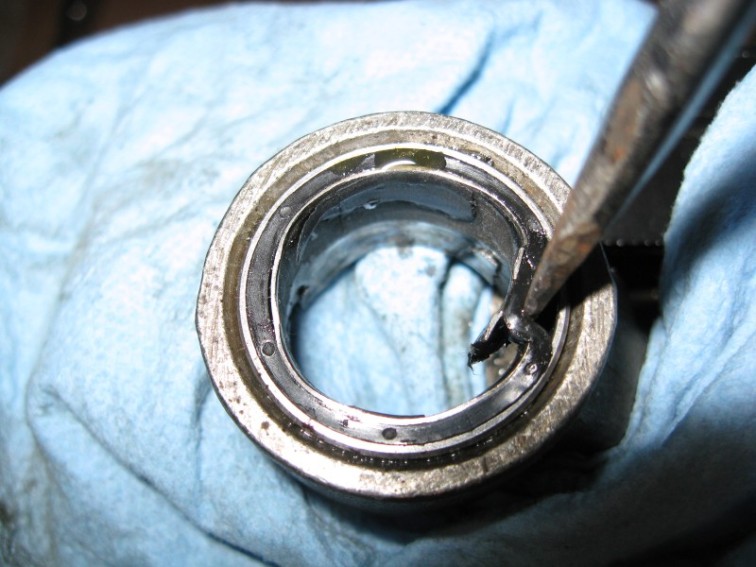 –C: Now comes the fun part, pulling that rubber bastard out of there. …you do it the same way as the metal ring, but it takes more tact. Working the flat-head up and down going around a little at a time, while applying tension with the needle-nose pliers works best. You’ll need to check down in there and make sure you got all the chunks and hunks out and you’re set!

Step three, installing the bronze bushing.
—A: Before you get all adhesive-happy, test fit that sucker a few times. Get your method down pat. You may or may not be able to drop it straight in between the pins depending on wear, lean it forwards and catch one of the pins at one of the notches. Do it a few times without hitting the sides of the aluminum piece if you didn’t remove it earlier. Now clean those suckers up REAL good with carb or break cleaner

—B: Now, I used a good dose of epoxy around the barrel down in the tranny (JBweld works best from my experience) I then mirrored this on the bushing itself. …being extra careful, I dropped it in, and smoothed the excess JBweld around the edges, I then put some weight on the top of the bushing so that it set flush. Beer time! *does a dance*

See image below for pic of it installed.

—C: Put the little button bushing on your shifter and the Marlin Crawler seat bushing in the top section (press it in vertically and match the notches to the pegs, and rotate flat in there. (Some go in tighter than others, if terribly difficult, you can sand down the outer diameter slightly) Mmmmm success. DO NOT REINSTALL YOUR SHIFTER AND “TRY IT OUT” YET!  I’d give it 24hrs to cure, then give it a good check over and reinstall everything.

!!!!!IMPORTANT!!!!!
We are back from vacation with all pieces in-stock and ready to rock. If you are international, please look up to make sure USPS is currently shipping to your country before ordering (Exa: can not send to NewZealand at this point)
!!!!!IMPORTANT!!!!!